Blanche and Her Mother 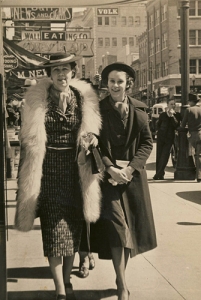 Blanche Eustace was born on July 12, 1904 in Council Bluffs, Iowa to Richard Chambers and Edith Norbis.  Richard was born in upper New York State in a town called Watertown, and his family apparently came to America over 200 years ago from England.  Similarly, Edith’s family could also trace their origins to Plymouth, England.  Blanche says that ancestry was always a big source of pride in her family.

Blanche’s mother, Edith, grew up on a big farm in Kansas, but she hated “country life,” so, at sixteen she ran away to the town of Manhattan, Kansas and got a job in a hotel there.  Before her father discovered where she had gone and then subsequently went to retrieve her, Edith managed to meet Richard Chambers, a guest at the hotel where she was employed.  Richard was a travelling salesman who was just beginning his career, and he took a fancy to Edith.  Though her father managed to drag her back to the farm, Edith kept in touch with Richard and eventually married him.  The young couple moved to Council Bluffs, Iowa because Richard thought it was an ideal place to raise children.  Edith had two children within two years: Martha and George, and then fifteen years later, Blanch came along, which was a big shock to Edith.  Richard was gone most of the time, travelling from town to town, so it was Edith who struggled to raise the kids on her own and to take care of the house and yard.

The years passed, and the oldest in the family, Martha, left to get married.  Edith and Richard did not approve of Martha’s choice of a husband, but Blanche does not remember why.  Her brother, George, also married around that same time and took over the management of a large ranch that Edith and Richard owned in Nebraska.  That left only Blanche at home.

Not long after Martha and George left, Edith decided she had had enough of small town life, so when Blanche finished school, Edith decided to move to Chicago.  She had somehow attended the Chicago Exposition back in 1893 and had fallen in love with the city.  Since that time, it was her dream to get back to Chicago, and she saw this as her chance.  She didn’t divorce Richard; she just moved.  So now instead of Richard going “home” on the weekends to Council Bluffs, he went “home” to Chicago.

At first Edith and Blanche stayed at a hotel until Edith could find a suitable apartment.  Blanche says that her mother was a very hard woman to please, but they finally found something decent at Sheridan and Pratt.  Neither Edith nor Blanche got a job and instead spent almost all of their time together, especially since, says Blanche, her mother always acted younger than her age.  Edith loved it when people mistook them for sisters.  Blanche says that it was a strange time in her life; she and her mother did everything together, and they were truly best friends.  Before they moved to Chicago, Blanche says she was very studious and excelled in Latin.  Now, she didn’t go to school at all, and instead passed the time by playing the piano.  Back in Kansas, she had begun piano lessons at the age of five and had only been allowed to play classical music, but now, Edith encouraged to play show tunes and to go out dancing.  As it turns out, Blanche developed quite a talent for dancing and learned all the latest dances coming out, her favorite being the Fox Trot.

When Blanche was just 14, America entered World War I, and she and her mother traveled to Camp Dodge in Iowa, where Blanche’s brother, George, was a new recruit.  It was at Camp Dodge that Blanche first met Peter Eustace, who was the attendant at the information desk the day Edith and Blanche turned up looking for George.  Peter was 13 years Blanche’s senior, but they wrote letters to each other and eventually fell in love.  When Blanche turned 18, they were married.

Fortunately, Peter was never shipped overseas, and when the war ended, the young couple took up residence in Chicago, where Peter’s family was from.  They found an apartment on the north side, near Peter’s family.  Peter worked as a commercial artist, and Blanche stayed home to care for their four children: Oscar, Rita, Eugene and Elaine.  After about five years, they bought a home in Park Ridge, which, Blanche says, was considered pretty “far out” of the city at the time.  They remained there for about four years before moving to Evanston and then to Oak Park for the school system, where they remained for over twenty years.  They bought a big house there because Blanche thought it was important for each of the four children to have their own room.

After all of the children left, Peter and Blanche moved to a smaller house.  Blanche says that they always had similar tastes in things and really enjoyed staying home together.  Eventually, though, Peter passed away of a stroke when he was in his eighties.  Blanche says that she “woke up one day a widow.”  Not long after his death, she suffered a stroke as well, which has affected her right side.  Despite the stroke, she was able to live independently for several years before experiencing more problems.  Recently, it has become obvious that she can’t live alone, so she made the reluctant decision to go to a nursing home.

Blanche is a very quiet, sweet lady who is easily intimidated.  She shrinks away from loud noises, including loud talking.  If addressed quietly and intelligently, however, she will respond and will hold a conversation with pleasure.  At the home, she is interested in any of the “intellectual” offerings, such as discussion groups or listening to classical music.  She also enjoys reading and watching PBS.  As a rule, she does not enjoy big group activities but prefers the company of one or two residents or that of her two daughters, who visit frequently.