The Secret to Happiness: “Be Content With What You Have.” 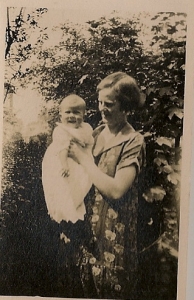 Estelle Oberst was born in Chicago on October 20, 1900.  Her father, Edwin Larsen, was an immigrant from Norway, and her mother, Theresa Amsel, was an immigrant from Germany.  The two somehow met after they arrived in Chicago and married not long after.  Estelle does not remember exactly where her father worked, but she thinks it may have been in a factory.  Her mother cared for their eight children (Gunther, Edward, Agnes, Hans, Felix, Helen, Estelle and Ludmilla), all of whom made it to adulthood except one, Ludmilla, who died in the flu epidemic.  At age 94, Estelle is the only member of her family still alive.

Estelle attended two years of high school and then quit to begin working as a punch press operator at Sunbeam.  When she was nineteen, a new foreman started at work, Joseph Oberst, who took an immediate liking to Estelle.  Estelle was not interested in him, but he continued to pester her until she finally agreed to go on a date with him.  She was apparently not impressed, but Joseph continued to pressure her to go out with him, which Estelle would reluctantly do from time to time.  Her friends were shocked, then, when one day she announced that she was going to marry him and would not explain why.

As soon as they were married, Joseph demanded that Estelle stay home to be a housewife, which Estelle obediently agreed to.  She eventually had two children, Charles and Joseph, Jr., whose birth she almost died during because he was so large.  Estelle’s marriage to Joseph was apparently an unhappy one, and she describes Joseph as “a miserable man.”  Still, she tried to create a nice home for her two little boys.

Besides caring for her children, Estelle was devoted to her church, First Congregational, and was the oldest living member for many years.  She was very active there throughout her entire life and held a variety of volunteer positions, including sitting on the board of many committees.  She also ran craft bazaars, organized bake sales, was a leading member of the sewing circle, and cooked and cared for many of the sick and elderly in the parish.  In fact, many, many elderly were able to stay in their homes a few extra years because of Estelle.  Estelle even took in her mother-in-law, Margaret, though she was a very angry, bitter woman.  None of Margaret’s other children wanted anything to do with her, so Estelle offered their home to her and lovingly cared for her until she died.

Estelle spent most of her life devoted to caring for others, but in her seventies, she began experiencing her own series of losses.  The first was the death of her son, Joseph, Jr., who died suddenly at age 48 in 1976.  He had never married.  Then, a year later, her husband, Joseph, died, followed by her other son, Charles, who left behind a wife, Virginia, but no children.  So in the span of two years, she lost her husband and both sons – her entire family, except her daughter-in-law.  It was a very difficult time for Estelle, but she continued to try to have a positive attitude.

As the years went along, she came to rely more and more on Virginia, who likewise became increasingly devoted to Estelle and very protective of her.  Virginia describes Estelle as being “a tough woman with a very strong will to live and a very positive attitude toward life.”  Estelle, she says, would do anything for anyone and “has a heart of gold.”  Virginia says that Estelle would never go to someone’s house without bringing them something, usually something she baked or sewed.  She says she dealt with her many losses in life, including her horrible marriage, by constantly reaching out to others.  If she was experiencing something sad, she would seek out someone worse off than herself and try to comfort them.

Estelle was still very active (and drove herself everywhere!) up until the age of eighty-eight when she fell and broke her hip.  She was temporarily hospitalized but was able to go back to her own home eventually.  She continued to have falls for the next four years and ended up in the hospital again in 1992 after a particularly bad one.  Though Virginia has been helping Estelle for several years with cleaning and errands, she recently began to feel that she could no longer care for Estelle full-time, as she herself is in her seventies now with her own health problems, including a bad back.  Neither of them could afford the kind of home health care Estelle would need in order to stay in her home, so Virginia made the decision that Estelle should be released from the hospital to a nursing home.

Estelle is not particularly happy about her placement and believes that she will someday return home.  She is a very agreeable, sweet person, but is very hard of hearing.  This, plus the fact that her attention span and memory are poor, makes it hard for her to participate in activities or befriend other residents.  She enjoys one-on-one attention from the staff, however, and will converse as much as she is able.  Meanwhile, Virginia tries to visit as often as she can.

When asked about her life, Estelle says that is was a happy one, though she still misses “my boys.”  When asked what her secret to happiness is, she says that it has been her faith and that you have to “be content with what you have.  There’s always someone worse off than you that can use a hand.”