“All I Know Is Horses” 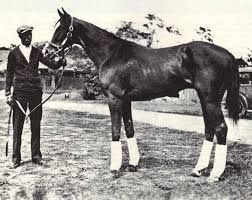 Leon Carter, Jr. was born on September 21, 1950 in El Dorado, Arkansas to Leon Carter, Sr. and Norma Jones.  Leon, Sr. and Norma knew each other from little on.  Not only did they go to school together, but their families were good friends and they were often together.  Leon and Norma eventually fell in love and married.  Leon worked in construction and did odd jobs, and Norma was a housewife.  Shortly after their first child, Leon, Jr. was born, however, Norma abandoned them both and ran off to Chicago.  She eventually married another man, Mario Sanchez, and had one daughter, Donna, with him.  Later she married a third man, Reed Bryant.

Leon Sr. did his best to raise “junior,” but when young Leon was about nine years old, his mother, Norma, reappeared in El Dorado, Arkansas and insisted on taking him back with her to Chicago.  Norma put him in school here, and in the summers, he worked at the racetrack.  After he finished tenth grade, he quit school and began working at the track full-time.

Leon says that he started at the bottom and worked his way up to being a groomsman.  He began his career as a “hot walker,” which meant that he walked the hot horses after a race until they cooled down.  He was a fast learner, he says, and quickly learned the best way to cool a horse, how much water to give them, etc., and how to care for them in general.  He became an expert at horses, and his services were much sought after through the years.

Leon didn’t have much time for hobbies, but he did enjoy fishing, baseball, and playing cards or dominoes.  He lived with his mother and his half-sister, Donna, until one day he met a young woman by the name of Patricia Woods, who was a co-worker of his mother’s.  Leon and Patricia hit it off right away, and Leon soon moved in with her and her three daughters: Beverly, Cynthia and Deborah.  Leon and Patricia never married, but they lived together for over fifteen years and had two sons together, Leon III and Robert.

Leon continued working at the track during the summers, but in the winters, he would head to New Orleans, where he worked at a track there.  It turns out that in New Orleans, Leon had another girlfriend, Darlene Hayes, whom he lived with each winter for over twenty years.

Meanwhile, back in Chicago, Patricia was getting tired of Leon being gone half the year while she cared for five kids alone, and she decided to leave him.  Leon claims that she was an alcoholic who was growing increasingly paranoid and suspicious of everything around her, including Leon and his double life in New Orleans.

Unfortunately, right at about the time when Patricia officially left him, Leon began experiencing some serious health problems.  His legs were beginning to swell, and after going to the hospital, he was diagnosed with diabetes and kidney problems.  He was in Chicago, so he couldn’t rely on Darlene, his New Orleans girlfriend/common-law wife.  His mother, Norma, had died several years before, and his father had since moved to California to become a minister.  Leon’s only choice seemed to be to go and live in Cabrini Green with his half-sister, Donna, his mother’s child with Mario Sanchez, and her six children, the oldest of whom was eighteen.  Unbeknownst to Leon, however, Donna was a drug addict and soon stole all of his possessions and sold them for drug money, though she swore it wasn’t her.

Leon managed to put up with this living situation for a couple of years.  Sadly, during that time, he got word that Patricia had died.  He would have liked to go to the funeral, he says, but he didn’t know about it and blames his sons for not telling him.  Both Leon III and Robert had apparently become estranged from their father over the years.  Leon III had long since moved out of Patricia’s house and was living with his fiancé, and Robert was sharing an apartment with his half-sister, Cynthia, one of Patricia’s daughters.

Leon was very upset by Patricia’s death, but he soon had other things to worry about.  Right at about that same time, Donna decided to jump ship as well and left Leon with her six children in the Cabrini Green apartment.  Leon was still working on and off at the track, though he was limited in what he could do because of his health and did not get many hours.  He tried to take care of his nieces and nephews as best he could, but the older ones especially did not appreciate their Uncle Leon’s involvement and blamed him for their mother, Donna’s, mysterious disappearance.  Leon tried to teach them how to cook and fend for themselves, but they weren’t interested in listening to him.  They often rebelled against him and, as his health grew worse and he became weaker, they sometimes even refused to give him food.

Leon’s health continued to decline, and he eventually had to have his left leg and his right foot amputated due to complications with his diabetes. He then went blind and had to rely entirely on whatever care or scraps his nephews or nieces would give him, the two youngest girls—Pamela, age twelve, and Jennie, age ten—being the most sympathetic to him.

Then out of the blue one day, Donna magically reappeared, apparently “strung-out,” says Leon, and threatened to go away again and take all of the children with her this time so that he would have to care for himself.  As it turned out, however, as he ended up going to the hospital yet again and had to have extensive dialysis.

While in the hospital this time, Darlene, his girlfriend from New Orleans, appeared, saying that she wanted to be back in his life and take care of him.  They soon fought, however, before he was even released from the hospital, and she declared their relationship over and went back to New Orleans.  The staff at the hospital tried to reach his two sons, but they were not responsive.  The hospital social worker then suggested that Leon be admitted to a nursing home, and, not having any other choice, he reluctantly agreed.  He is hoping for prosthetic limbs, however, and a chance to get his own apartment.

While Leon says he is grateful to be somewhere getting care, he is dealing with a lot of conflicting emotions, especially anger.  He says that his life’s motto has been to “grin and bear it,” but he admits to having a “hot temper,” which has affected many of his relationships in life.  “I guess I screwed up my life,” he says.  “All I really know is horses.”

Leon is depressed and sad that not one member of any of his various families have come to see him, nor has he gotten one card or phone call.  He does not like to mix with the other residents because he sees himself as so much younger than them, but he is likewise bored and irritable.  He is not accepting of the diabetic diet the staff have put him on, among other things, and is often verbally abusive to staff members because of it.  He says he is biding his time until he can get his own place, sadly choosing to believe that Darlene might still come through for him.