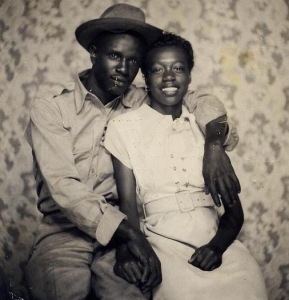 William Jefferson Sanders was born on January 16, 1921 in Tennessee to Lamar and Ivory Sanders.  William reports that he has many brothers and sisters and many half-siblings as well, but that he can’t remember exactly how many.  He attended two years of high school, and when he was twenty-one, he married his childhood sweetheart, Kalisha Jones, who was just sixteen at the time.  William is fond of saying that he and Kalisha were “country people” who had had grown up and attended school together.

Shortly after their marriage, however, World War II broke out, and William enlisted in the navy.  He served in the South Pacific and ended up in the jungles of New Guinea, New Caledonia and Manus Island.  In total, his tour of duty lasted two years, six months and eighteen days, and in all that time, he faithfully sent his check home to Kalisha each pay period.  When he returned home, however, he was shocked to find that Kalisha had taken all of the checks and opened her own account with them.  William promptly went to the bank to get the money out, but they refused to allow him access because his name was not on the account.

Kalisha chose this moment to tell him that she wasn’t going to go back to doing whatever he told her to do and that she wanted her own money.  “After that,” William says, “I was henpecked.”

Upon being discharged from the navy, William was offered job at the arsenal in Milan, Tennessee, but after a couple of years, there were changes in management and he had to move to a new facility.  He was given the choice of a job at either of the arsenals in Joliet or Alabama.  William chose Joliet because of the racial tensions in Alabama, so he and Kalisha moved first to nearby Kankakee and then later to Joliet itself.  William relates that he really enjoyed working at the arsenal in Joliet and eventually became a supervisor.

A dark cloud was brewing, however, in that William seems to have neglected to pay the IRS some tax money amounting to $64.00.  William claims he planned to finally pay the back taxes out of his next pay check, but it happened to coincide with Kalisha’s yearly Christmas trip back to Tennessee to see her mother.  Kalisha had planned on the extra money for the holidays, but when William told her that she was going to have to skip it this year, she cried so much that William finally gave in.  The IRS was not as compassionate, however, and got the arsenal involved, who, in turn, fired him on December 17th.

Depressed, William decided he needed to go to Key West for a change of life and scenery, but Kalisha thought this was a ridiculous idea.  William was determined, however, and went without her.  Kalisha instead stayed in Joliet with their daughter, Maggie.  William sent money to them for a while, but then got sick of it and decided that if Kalisha wanted money she would have to come to Florida to get it.  Of course she refused, and that was pretty much the end of their relationship.

William remained in Key West working construction for about nine months before returning to the Chicago area.  He found a job at a lumberyard in Berwyn as a shipping and receiving clerk.  His IRS troubles followed him, however.  By now, William owed the government over four hundred dollars.  Unlike the arsenal, the lumberyard did not fire him but instead garnished his wages until the back taxes were paid.

William says he was “a hard-working man” at the lumberyard and that his boss liked him so much that he never allowed him to take a vacation but paid him extra instead.  William, it seems, after many years of this, just couldn’t take it after a while and, needing a break, took off for Tennessee to visit his mother and remained there for over six months.  Eventually, though, he knew he had to return to his old life and wrote to his boss asking him for his job back.  Surprisingly, his boss agreed, and William went back to the lumberyard and worked for several more years before quitting and getting a job as a janitor at the Brach candy factory, where he happened to be working during the famous case of Helen Brach’s disappearance.

Eventually, William retired due to severe arthritis in his hands and back as well as kidney problems.  He was able to live on his own for a number of years before having to go to a nursing home.   He has had some contact over the years with his daughter, Maggie, though she is partially handicapped herself and unable to care for him.  Meanwhile, he remains estranged from Kalisha, whom he believes is still living in Joliet.

For the most part William seems to enjoy his life in the nursing home.  His memory is perfectly intact, and he loves talking about the past with the staff and the residents who are able to carry on a conversation.  He was an active member of the American Legion, the VFW and the Elks and loves gospel music, movies, and smoking a pipe.  His favorite drink is Budweiser.  He says he used to try to drink hard liquor when he was in the navy, but it didn’t agree with him.

William appears to be a very gentle, charming, easy-going man, but he says that in his youth he was very hot-tempered and that he was prone to fighting to deal with stress.  If someone crossed him, he says, he immediately wanted to fight him.  “It’s a terrible thing to have,” he admits.  “You do things you regret later, and it hurts you.”