He Promised to Take Her Dancing Every Week! 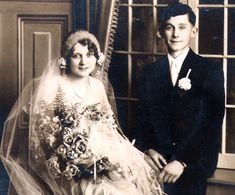 Clara Mae Hansen was born on May 14, 1902 in Adrian, Michigan to Henry Engelskirchen and Katherine Burkhart.  Henry was of German descent but was born in Mendota, Illinois, and Katherine was originally from Orland, Il.  Henry apparently had a hard life.  When he was ten years old, his stepmother made him quit school to go work in a brickyard.  Eventually, he ended up working as a superintendent in a piano factory in Mendota.  He met and married Katherine Burkhart, and together they had nine children: Arthur, Henry, Walter (who died at eleven months), Harvey, Clara, Alma, Willard, Howard and Florence.

When the piano factory closed down in Mendota, the family moved to Steger, Illinois, where there was another piano factory.  They remained there only five years, however, as they did not like Steger and decided to try their luck in Chicago.  Clara was nine when they moved to the big city.

The Engelskirchen family settled in the northwest part of the city and managed to make a living as best they could.  Tragically, however, Katherine died in August of 1916, just five years after moving there.  According to Clara, the family was attending the funeral of a friend on the outskirts of the city, and as they walked along in the funeral procession in the hot August sun, Katherine became overwhelmed with thirst.  They happened to pass an old, deserted farmhouse near the cemetery, and when Katherine spotted a well in the front yard of the farmhouse, she broke off from the procession to get a drink from it.  Alarmed, Henry tried to stop her, warning her about drinking from a well that had not been used for such a long period of time.  Katherine ignored him, however, and drank from it anyway.  As a result, she came down with typhoid and eventually died.

At the time of her mother’s death, Clara was fourteen and, as the oldest girl in the family, was made to stay home and keep house and care for the children.  Her youngest sibling, Florence, was only four.  Clara, who had been so looking forward to going to high school, had to quit after only attending for two days.  She was utterly crushed, as it had been her dream to go to school beyond eighth grade.  She begged her father to hire someone to come in and take care of things instead of her, but he claimed he couldn’t find anyone who would take on such a big family and that he couldn’t afford it anyway.

So Clara stayed home for two years, and when she was sixteen, Henry was finally able to find someone to hire on a part-time basis.  By then, however, it was too late for Clara to attend high school, so she got a job at Carson’s Wholesale, which she ended up really enjoying.  There, she met a friend, Florence, who was always begging her to come with her on a Saturday or a Sunday night to the nearby Mable Theatre on Elston and Irving Park Road (later becoming the Revue Theatre in 1934), which, Florence claimed, had the best vaudeville acts around. After much refusing, Clara finally agreed to go with her one night and found herself laughing as much as Florence. They spent the walk home talking about which had been their favorite acts and laughing all over again. Eventually, however, they noticed that two young men were following behind them. When the girls finally reached Clara’s house, one of the boys, Arthur Phillip Hansen, asked if he could have Clara’s telephone number. Clara lied and said they didn’t have a telephone, but Florence spoke up and said that “they do too have a telephone!” and promptly gave Clara’s number to the hopeful Arthur.

As it turned out, Clara rather liked Arthur, and they dated for two years before Arthur worked up the courage to propose. Clara was hesitant to accept him because she didn’t want to give up going to dances.  Although she liked Arthur well enough, her real love in life was dancing. Arthur, for his part, didn’t dance, but he swore to her that if she married him he would drive her and her girlfriends to the dance halls every week. Clara agreed, then, and was married at eighteen, which she later said, “was too young!” and that it was “a rotten trick!” as no sooner was she married but she got pregnant, and that was the natural end of her dancing days.

Arthur and Clara seemed happy enough, however, and had three sons: Robert, Richard and Jack.  They lived in the same apartment on Kasson Avenue for 29 years. When they first met, Arthur had a job as a roofer, but after three close calls, he took up carpentry instead and worked at that for the rest of his working life.  Clara’s father, Henry, died at age 71 the night Pearl Harbor was bombed. Clara does not remember of what. Arthur died at home in 1990, age 93, with Clara by his side.

Since Arthur’s death, Clara has steadily gotten worse on her feet and has fallen several times.  All three sons are themselves retired and battling health problems and are therefore unable to care for Clara.  They have all urged her over the past few years to go to a nursing home, but she has continually refused.  Recently, however, they were able to get her to go to a nursing home on “a trial basis.”  Clara therefore believes that she will soon be returning home, though her sons confess that this is probably not a realistic option.  Clara, despite wanting to go home, is making friends and participates in many of the offered activities.  “All of my friends have died,” she says and enjoys smoking and meeting other residents.  Her mind is still extremely sharp, and she can remember many stories of the past.  She likes the facility very much, she says, but she is just “biding my time” until she can go home.