“A Pillar of His Community” 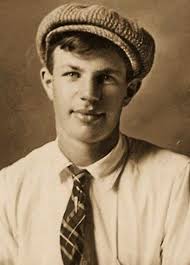 Leonard “Leo” Frazier was born on October 7, 1906 on a farm in Minnesota to Lewis and Marion Frazier.  Lewis was born in Minnesota, and Marion was a German immigrant.  Together they had eight children, of whom Leonard was the youngest.

When Leo was only three years old, his father died.  His mother eventually remarried and had two more children.  Leo’s stepfather was apparently very abusive to him and to his mother, and Leo only went to school until roughly the 3rd grade before he was made to work on the farm.  As he grew older, he also worked as a hired hand on surrounding farms and even worked, as a young teen, on a ranch in Montana for a while with his brother, Arthur, who had found work there as a blacksmith.

When he was about seventeen or eighteen, Leo decided to make his way back home from Montana, but found work along the way in Chicago, working construction.  He decided to stay and worked to get himself established before finally completing the trip back to Minnesota, determined to rescue his mother from his abusive stepfather.  Marion apparently did not need much convincing, and she escaped with Leo.  Together, they bought a small house in Oak Park, Il. though it was a struggle to keep it, especially once the Great Depression hit.  Eventually, however, almost all of Leo’s brothers migrated down to find work in the city and lived in the house with Leo and Marion.

In the 1930’s, Leo and his brothers formed the Frazier Brothers Construction Company.  Leo worked very hard, mostly doing remodeling work, and employed a man, Fred Schneider, to build cabinets in the garage behind their house in Oak Park, which Leo would then install in various homes.  Eventually, Leo formed a separate company called Frazier Home Utilities Company, which basically consisted of his arrangement with Fred to build cabinets as well as a lumber supply company of sorts.

When the war broke out, however, Leo found himself too busy to install the cabinets Fred was building.  Instead of remodeling and home construction, Leo and his brothers found themselves building barracks at Fort Knox and also did work for Chrysler at Great Lakes, which was producing products for the war effort.

After the war was over, business boomed for the Frazier Brothers Construction Company and Leo was swamped with work.  He still managed, however, to build a handful of homes himself from the ground up, many of which can still be seen today in Villa Park.

When Leo was twenty-four, he was set up on a blind date with a young woman, Lucille Cotter, who was four years his junior.  The two of them hit it off right away and got married in 1930.  They had two children: Sidney and Sissie, and Lucille acted as the bookkeeper for both of Leo’s companies.  After the Depression, Leo’s brothers eventually married as well, and one by one, left the house until only his mother, Marion, remained.  She lived with Leo and Lucille until 1950, when she fell and broke her hip.  Upon her release from the hospital, however, she needed so much care that Leo was forced to put her in a nursing home.  She died soon after at age eighty-three.

Leo and Lucille apparently had a very happy marriage, one of their favorite hobbies being square dancing.  They became friends with a couple who were famous in the region as “callers”—Lulubell and Scottie McPherson.  The four of them remained friends for many years, and Leo even did work on their house in Oak Park for them.

Besides square dancing, Leo’s other passion in life was horseshoes.  Apparently, Leo traveled all over the country—and the world!—competing in competitions and won over 100 trophies.  Leo’s son, Sid, says that he rarely saw his father when he was growing up, as he was always working or away at a horseshoe competition.  Leo was also an active member of the “Freedom Through Truth Foundation,” which was a civic group that focused on educating people about how money is created, circulated and used by the government or big businesses to keep people in debt.

In 1984, Leo felt it was time to retire and accordingly dissolved Frazier Home Utilities Company, but he allowed his nephews to take over the Frazier Brothers Construction Company.  About four or five years later, however, it closed, too.

In 1993, Lucille passed away, which is when all of Leo’s troubles began, says Sid.  Lucille’s death was terribly hard on Leo, as they had been married 63 years.  He became depressed and angry and then began to slip mentally.  Finally, it was decided that Sid would move in with his father for a time, hoping that if he could provide balanced meals for him, his confusion might get better.  Even under Sid’s supervision, however, Leo got progressively worse, so Sid and his wife, Jean, finally arranged for Leo to be admitted to a nursing home.  Leo’s daughter, Sissie, lives in Vermont and is not a part of his care plan, though she calls several times a week to talk to him.

Leo is able to communicate at times, but he remains very confused.  He spends most of his time wandering the halls and periodically attempts to leave the facility.  He is easily redirected, however, and does not become agitated.  Frequently he asks for Lucille or Sid.  Sid visits as often as he can and attempts to play checkers or chess with his father, which Leo used to love and which was one of the few things that he and Sid shared as Sid was growing up.  At first, Leo seems enthused to play but then quickly becomes distracted.

Sid ruefully reflects that despite the fact that Leo wasn’t the most active, present father, he was was “a real pillar of his community.  Everyone respected him.”