“You Have to Stay Positive.” 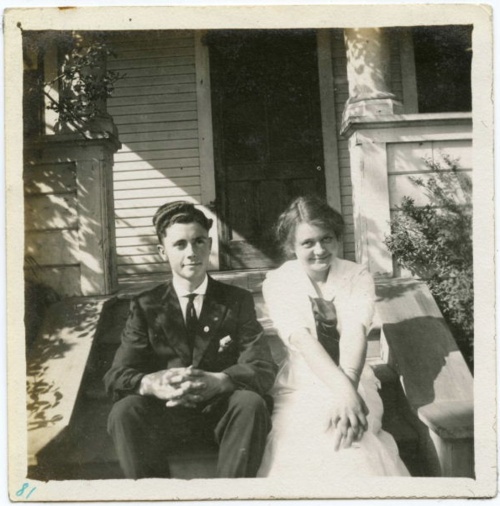 Simona Novotny was born on November 25, 1901 in Blatnice, Czechoslovakia to Joseph Novotny and Pavla Adamik and was the youngest of nine children.  Joseph was a flax farmer who routinely traveled to Germany in the off months to sell his flax.  Simona says he made a good living this way because the Germans were eager to buy flax to make carpets “for the long winters.”  Both of her parents were very healthy, Simona says, and lived into their nineties when they both died of “old age.”

Both of Simona’s brothers became butchers, and her six sisters all married tradesmen of some sort.  Simona, however, after completing the eighth grade, wanted something else.  She and her girlfriends wanted to go to America.  Many people from her village had already made the journey, and, since she was the youngest of nine, Simona explains, her mother finally relented.

So it was, then, that the summer after Simona turned eighteen, she and four of her friends set sail for America.  The sea voyage took twenty days.  When they got to America, they made their way to Detroit, Michigan, where a sister of one of the girls lived.  Simona quickly found a job as a maid in a church rectory.

Oddly, after only a couple of months of being in this new country, she happened to run into a young man she knew from her village of Blatnice.  He was older than her and had been in the same class as one of her brothers.  Simona didn’t know him all that well, but it was nice to see someone she recognized.  His name was Joseph Novotny, the same as her father.  Simona wasn’t too surprised by the coincidence of his name, as it is a very common one, she says, in Czechoslovakia.  She was surprised, however, when Joseph asked her to marry him not long after they became reacquainted.  “He was very persuasive,” says Simona, and, almost on impulse, she decided to take a chance and marry him.  They went to the justice of the peace to get married, but later had their marriage blessed in the Catholic Church.

After only a few months, Joseph suggested they move to Chicago, where he said he had many friends.  Simona wasn’t so sure she wanted to leave all of her friends, but she decided to trust Joseph and agreed to move to Chicago.  As it turned out, they were quickly enveloped by the Czech community there, many people from their village having immigrated to Chicago after the war.

The Novotnys found an apartment on the northwest side, and Joseph got a job with a company that made auto parts for General Motors.  Simona remained at home as a housewife and cared for their three sons: Frank, Joseph, and David.  Simona was an avid gardener and was also very involved in her church, St. Sylvester’s, in Logan Square.  She was part of the St. Vincent DePaul society and also the Altar and Rosary.  She and Joseph never travelled much, except once to Detroit and once to Niagara Falls, preferring instead to stay at home.

Simona and Joseph apparently had a very happy marriage.  They were a very social couple and had many friends.  They often invited people over to their house for parties, and they always had a big Thanksgiving dinner, especially since it was usually on or around Simona’s birthday, and would invite lots of people from the neighborhood who had nowhere else to go.

The only real tragedy that befell the Novotnys was when their son, David, died at age twenty in a freak car crash.  David’s death was particularly devastating to Simona because he was her favorite.  She went into a depression for quite some time, but she eventually came out of it.  “You have to stay positive, no matter what,” she says, even now.  Her sons say that it was her intense faith that got her through that time, though how Joseph coped, they don’t know, as he refused to ever talk about David after the funeral.  Simona, on the other hand, says that she takes comfort in knowing she will see David again someday in heaven.

In the early 1970’s, Joseph again persuaded Simona to move, this time to Union Pier, Michigan to retire.  There they again made many friends, and Simona had a very big yard in which to garden, despite the fact that she had just turned seventy.  After only four years of being there, however, Joseph died suddenly one morning of a heart attack while shoveling snow.  He was seventy-eight.  Simona remained in Union Pier for another sixteen years.  Recently, however, at age ninety-two, she has become afraid to stay there any longer on her own.  She is in remarkably good health, but she decided that she wanted to come back to Chicago and move into a Czech nursing home where her friend, a Mrs. Cerveny, resides.

Simona’s two sons, Frank and Joseph Jr., helped her to make the arrangements, and she is making a very smooth transition to nursing home life.  She is extremely cheerful and positive and is enjoying having all of her meals prepared for her, especially some of her Czech favorites, though she says she herself makes them a little differently.  Still, she says, she is grateful.  She seems very interested in all of the activities the home has to offer, but so far spends most of her free time visiting and talking with Mrs. Cerveny, who is delighted to have her old friend back.