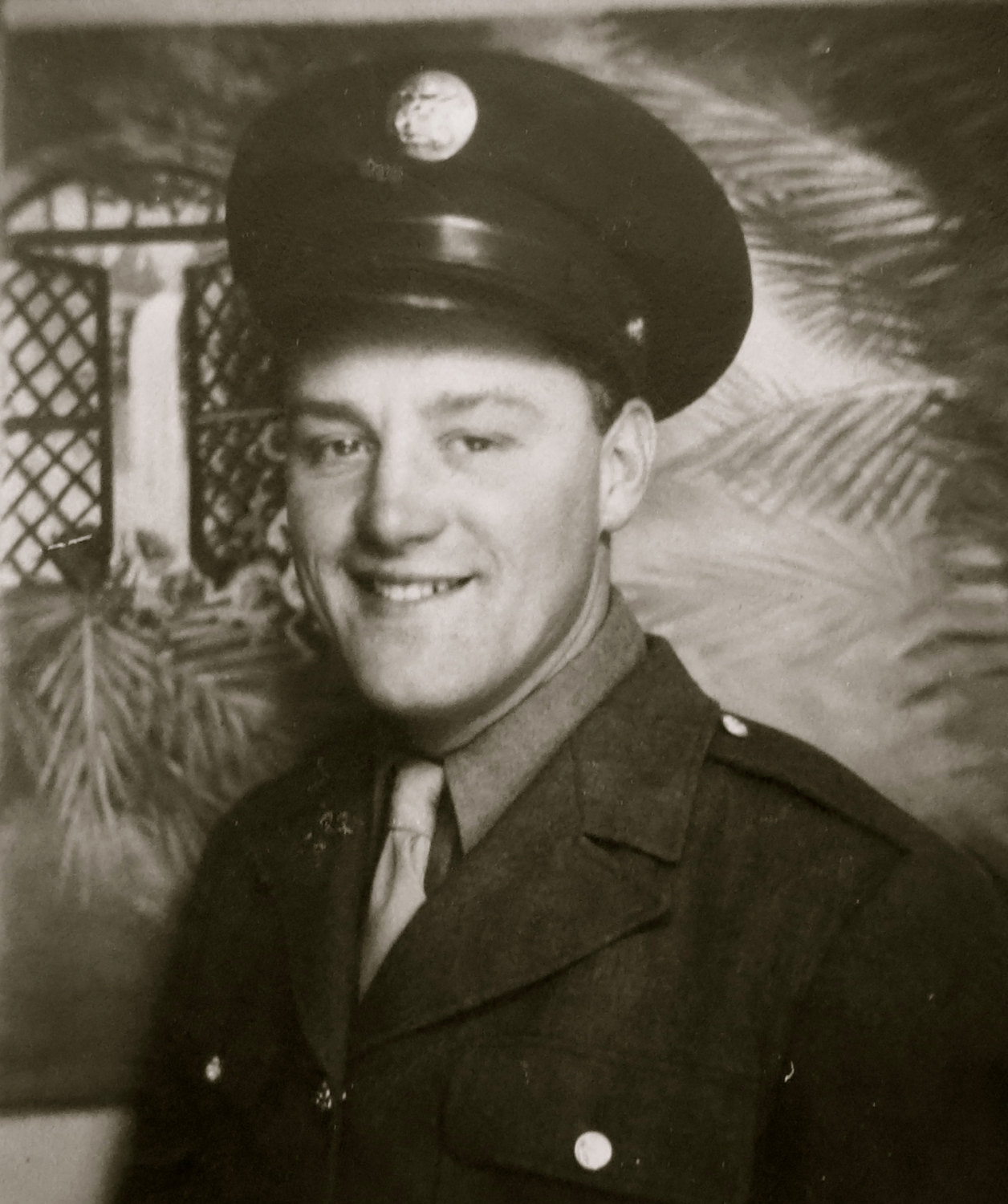 Robert “Butch” Baumgartner was born on May 25, 1915 in Pound, Wisconsin to Moritz “Morrie” Baumgartner and Maria Dreher, both immigrants from Germany.  Moritz owned a farm in Pound, but he also worked as a stone mason to bring in extra money.  Maria cared for their nine children: Michael, Meinhard, Nora, Otmar, Samuel, Rebecca, Robert (Butch), Sonia and Sieger.

Butch was apparently a very intelligent, quiet boy with “a great mind.”  He was apparently “a whiz” with numbers and could “add numbers in his head faster than a machine could.”  But he was also good with languages and words as well.  He learned German from his parents, of course, but he also learned Polish just by speaking to the Polish neighbor kids on the farm next to theirs.  He apparently loved to read, and if he was ever missing as a child, his family knew to look for him under a tree somewhere on the farm, where he could always be found with a book.

Butch graduated from high school and went on to take some college classes to learn accounting.  He continued working on the farm with his father and brothers, though, until World War II broke out.  At the time, he was twenty-six and saw this as his chance to “get off the farm.”  He traveled to Chicago to join the air force, but they told him he was two months too old, so he “went next door” to the army and joined up.  He served in the South Pacific for almost five years.

While he was away at the war, Butch’s sister, Nora, got married and moved to Chicago with her new husband.  When Butch was discharged, he went to stay with them rather than return to the farm in Wisconsin.  He found a job relatively quickly which utilized his previous accounting skills.

Not long after he got a job, Nora and her husband, Ed, decided to set Butch up on a blind date with a friend of Ed’s from work, a woman by the name of Lydia Caspari, who was of Swiss and English descent.  The four of them went out on a double date, and Lydia and Butch really hit it off and began dating in earnest.  After only a few months, they wanted to get married.  Lydia’s parents were not in favor of such a hasty marriage, but they eventually gave in.  Butch and Lydia were married, then, at Pilgrim Lutheran Church and went on a honeymoon to Niagara Falls.  When they returned, they moved in with Lydia’s parents, who owned a two-flat on Winchester.  Lydia’s sister and her husband lived in the upstairs apartment, and Lydia, Butch and Lydia’s parents lived in the downstairs apartment.

Butch changed jobs a number of times until he found a position in the accounting department of ABC printing on Elston Avenue, where he remained until he retired at age sixty-eight.  Lydia worked as an office manager at Grainger for over forty-seven years, even after having two children, Tom and Bernice.  Lydia was loathe to give up her job, so when her sister, still living in the upstairs apartment, offered to watch the children, Lydia quickly agreed.  It was an arrangement that seemed to suit everyone, as her sister was unable to have her own children and loved taking care of Tom and Bernice.

Lydia and Butch continued living in the two flat, even after Lydia’s parents died.  Butch was a quiet man who did not like to socialize much, Lydia says.  He was a real “outdoorsy” kind of man, who loved hunting and fishing and playing sports.  In fact, after only a couple of years of being married, Butch and Lydia bought a cottage in Silver Lake, Wisconsin, where they often escaped to on weekends.  It was a place Butch loved to go to, not just to hunt and fish but to read as well, a pastime he enjoyed his whole life.

Though he was happiest alone or with Lydia or a few close friends, Butch apparently felt the need to give back to the community to a certain extent.  He joined the VFW in 1954 and eventually became the commander.  He also served as the treasurer of his church for many years.  He was a man with many interests and hobbies and could talk about anything.  He was rarely stressed, Lydia says, and was very non-confrontational, despite being a big man.  He never complained and didn’t like to argue with people.  He was “a real gentle giant,” Lydia says.

When Butch retired, he and Lydia spent more and more time up at the cottage.  In the early 1980’s, however, Butch began experiencing health issues for the first time in his life and was eventually diagnosed with Parkinson’s.  Lydia, who continued working until 1991, has been caring for him as the disease has progressed, but lately it has become too much for her.  After much persuasion, Tom and Bernice finally convinced her to put him in a nursing home.

Butch is not very responsive due to the progression of his disease, making it hard to assess his adjustment to his new surroundings.  He will open his eyes if his name is called, but otherwise, he is non-communicative.  Lydia is having a very hard time, however, and is considering admitting herself to the home so that she can be closer to him.  She does not seem to grasp that his condition is terminal.  “We had a great life together,” she says.  “I don’t want it to be over.”