She Was Crowned Western Electric’s “Beauty Queen” for 1929! 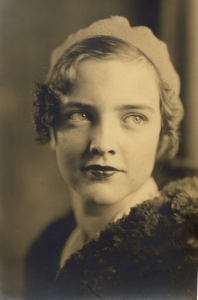 Vera Kadlec was born on August 10, 1909 in the village of Orlov, which is situated between Pilsen and Prague in the now Czech Republic.  Vera’s father, Andel Blaha, was the mayor of Orlov, and her mother, Vlasta Doubek, cared for their six children, of whom Vera was the oldest.  Vera attended grammar school and then quit to help her mother at home.

When Vera was around fourteen years old, there was a terrible fire in Orlov, and the Blaha’s home burned almost to the ground.  Almost everything they owned was lost.  Having to start all over, they decided they would start over in America.  Andel repaired the burnt shell of their home as best he could so that Vlasta and the children could still inhabit it while he took Vera with him to America to get things arranged for the rest of them to follow.

Upon arriving in New York, Andel made his way to Chicago, where an aunt and uncle lived at St. Louis and 28th.  Andel found a job right away making furniture, and Vera got a job at Western Electric.  After two years of working and saving, they sent for the rest of the family.  Vera and Andel picked out an apartment near Komensky Avenue and 30th in Lawndale and bought second-hand furniture to decorate it.  By the time Vlasta and the rest of the children arrived, it was finished, and they were all very proud of it.

Vera continued working at Western Electric and eventually met Dusan Holub at a dance in Pilsen Park.  Dusan was the son of Czech immigrants and had been born in Vienna.  He worked as a meat salesman for several companies, including Oscar Meyer later in life.  Dusan lost no time in proposing to Vera, and they were married shortly after when Vera was just seventeen.  They got an apartment at Lawndale and Crawford Ave., and Vera soon had a son, Dusan, Jr.

After only a couple of years, however, Dusan and Vera’s relationship soured due to Dusan’s excessive drinking, and Vera became very unhappy.  One day when she was getting her hair done, she confided to her hair dresser, Marie, that she wanted to divorce Dusan but that she couldn’t because she had no money.  Marie told her not to worry, that she would give her a job at the beauty shop.

Vera, it seemed, had beautiful skin and hair and had even been crowned the “beauty queen” at Western Electric in 1929.  Marie rightly figured that Vera could easily sell beauty products to her customers, which is indeed what she did.  Marie’s clients were always commenting on Vera’s beauty and consequently would inquire as to which beauty products she used, making it easy to sell to them.  Over time, Vera also learned how to cut and style hair and to give permanent waves and thoroughly enjoyed her new career.

A couple of years after her divorce, Vera met Stephen Kadlec who was a soda pop distributor and then a beer distributor after prohibition ended.  They married sometime in the early 1930’s, and Stephen adopted Dusan, Jr., who was about four or five at the time.  After their marriage, Stephen did not want Vera to work outside the home, so she gave up her job in Marie’s shop, but she continued to do hair for family and friends.  Stephen and Vera had a child, Stephen, Jr. not long after they were married.  Theirs was apparently a good marriage, and Vera was a very social, happy woman.  She loved talking with neighbors and friends and was an active member of the Ladies Aid at her church as well as Sokol and other Czech clubs.

In 1976, however, her husband, Stephen, died suddenly of kidney and heart failure.  For a while Marie then lived alone in their home in Berwyn until her son, Stephen Jr. came back to live with her.  He apparently had a lot of problems, though, and eventually committed suicide.  Vera does not seem to have fully accepted this and still speaks of him as if he were alive.

In recent years, Vera has been relying more and more on Dusan, Jr., who got into the habit of calling Vera every day to make sure she took her medication.  Her confusion, however, has recently gotten worse, and she has had a series of falls.  Dusan finally made the decision after her last fall to admit her to a nursing home, as he says he cannot possibly continue to care for her remotely, nor can he take her into his home.  He is already overwhelmed with caring for his wife, who has recently been diagnosed with early Alzheimer’s; a sick uncle; and his birthfather, Dusan Holub, with whom he had limited contact with on and off over the years and who is also now in a nursing home.  Even with all of these people depending on him, however, he still makes a valiant effort to visit Vera as often as she can.

Vera is delighted to see Dusan when he arrives at the Home, but she is sad and upset when he does not take her home with him, which almost makes the situation worse.  She is confused much of the time, though she is a lovely, sweet woman.  She is frequently apprehensive and continually stops staff members, and sometimes even other residents, to say: “I’m lost.  Can you help me?”  Her favorite activities are listening to Big Band Hour and Bingo.