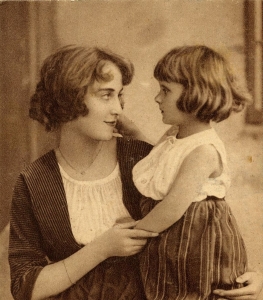 Irene Miller was born on November 4, 1913 in Chicago to Slawomir Kotwica and Maria Pestka, both of whom were Polish immigrants.  Slawomir made a living as a tailor, and Maria cared for their eight children: Louise, Josie, Ralph, Jack, Louis, Irene, Dick and Kenny.  Maria actually gave birth to an additional three babies, but they died shortly after birth.  Though it wasn’t the custom at the time, she insisted on naming them: Edna, Catherine and Leon.

Like her older siblings, Irene attended grade school at St. Mary of the Angels, where she did very well.  She excelled in art, however, and was thrilled when she won an art scholarship given by a sorority at Northwestern University to attend the Fine Arts Academy in Evanston instead of going to high school.  Though hesitant at first, Slawomir and Maria allowed Irene to accept the award, and Irene attended for one year.  Shortly after completing her freshman year, however, Irene became very ill and almost died.  Apparently her appendix burst, and she suffered horribly from peritonitis.  The school agreed to hold her scholarship for one year, but even after that amount of time, Irene was still not recovered enough to return, so she had to relinquish it, much to her sorrow.

After a couple of years, Irene was strong enough to be able to work again and got a job in a factory, which she hated.  She went to Wells High School at night to earn her diploma, which she eventually achieved, and then got a job as a bookkeeper.  Irene never returned to art school, but she didn’t forget her time there and was very proud of having attended, even for one year.  She kept all of her paintings and hung them up at home and liked to show them off to whoever happened to stop by.

After her dreams of becoming an artist were dashed, Irene instead began to dream of romance.  Though she worked in an office with many men, none of them seemed to interest her.  One night, however, when she went out dancing with some friends, she met a dashing young man by the name of Joe Miller, whom, she said “was a fantastic dancer.”  When Irene eventually brought him around to meet her family, they were, for some reason, not as impressed with him as Irene seemed to be.  Stubbornly, however, Irene insisted that Joe was “the one,” and when he suggested that they elope, she agreed, though they had only known each other for a few months.

After their hasty marriage, Joe and Irene got a small apartment on Hermitage, and Irene became pregnant almost immediately.  By the time she gave birth, however, Irene’s relationship with Joe had already soured.  They decided to divorce, though Irene does not elaborate on why, and Joe left town.  Devastated, Irene took her baby girl, Clara, and went back to live with her parents.

Irene’s mother, Maria, was apparently a very wise, insightful woman who was, Irene claimed many times, “ahead of her time.”  Though Maria was sympathetic and comforting to Irene, she urged her youngest daughter to get back on her feet, to work and save money so that she could get her own apartment and be independent, believing that this would be the best for Irene.  Tragically, however, two months after Irene and Clara moved in, Maria died.

Irene did not forget her mother’s words of advice, though, and after grieving for several months, finally decided to act on them.  She got a job and saved and saved and saved until she had enough to finally move out of her father’s house.  By this time, however, Clara was almost seven years old, and Irene worried about what she would do with Clara while she was working.

At that time, almost all school children went home for lunch, which was not a possibility for Clara since Irene needed to work all day.  Irene therefore searched around for a school that provided a hot lunch program, which was a rarity then, and finally found one at Holy Family Academy.  The tuition was higher, but Irene felt it was worth it.  She then began looking for an apartment within walking distance of the school and also took a different job at a company called Celmers, which was within walking distance of the school and their apartment, though it meant taking a cut in pay.

Irene then set out to prepare for any contingency.  She made arrangements with the nuns at Holy Family that if anything should ever happen to herself, Clara could stay there with them until someone from her family could come and claim Clara.  Irene walked Clara to school every day and left work each afternoon to walk her home to the apartment, which was above a shop.  Having safely deposited Clara at home, Irene would then walk back to work, where she stayed until evening.  Likewise, Irene also made an arrangement with the shop owners below the apartment, asking them if it would be alright for Clara to sit in the shop if she needed help or was simply scared.

According to Clara, it was a difficult transition to make in many ways.  She was quite used to living with her grandfather and aunts and uncles in a big house, where there were always people coming and going and visiting, so it was difficult for her to be in a small place with just her mother for company.  Clara suspects it must have been difficult for her mother as well, as she was constantly worried and had many digestive issues because of her perpetual stress.  Likewise, she had an elaborate prayer ritual which she followed day and night.

Eventually, however, Irene began to find her feet and create the life for herself that perhaps Maria, her mother, had envisioned for her.  Irene began to enjoy having friends over to discuss current events, philosophy, religion, and psychology.  Also, she never lost her passion for art, her creativity spilling out into any area it could.  She loved decorating the house, reading, doing artwork for her church, crocheting, and sewing.  She made many of her own and Clara’s clothes and even sewed curtains and bedspreads.  She was always dressed very stylishly and took special care with makeup, Clara says, though she was never interested in men or dating again.  In everything that she did, Clara adds, her mother had “a real flair” for color and pattern.

Irene’s favorite pastime, however, was simply being at home and spending time with Clara, whom she was utterly devoted to.  The two of them were truly best friends, and Clara lived with Irene for years and years—long after she became an adult.  “There was never a reason to leave,” Clara says.  Apparently, the two were so devoted to each other that Clara even waited until her sixties before she herself got married, as she didn’t want to leave her mother.  “We’ve always known we are kindred souls,” Clara says.

When Irene finally retired in the 1980s, she became more and more dependent on Clara.  She began to suffer from a long list of ailments and had to have many surgeries, including corneal transplants to help her increasing blindness due to glaucoma.  She then began to have a series of falls and became very disoriented and confused.  Clara agonized for a long time about placing her mother in a home, but in the end, she saw no other choice.  Clara, despite being a newlywed, remains faithful to Irene and continues to visit her daily, a beautiful tribute to the life they once shared.